Mocca: NFTs Can Be Highly Beneficial to Indonesian Music Industry

NFTs and the Indonesian music industry seem to be having some kind of a special relationship lately. Just last month, we’ve witnessed several music-related NFT projects being launched, starting from NFT tickets for Dewa 19’s 30th-anniversary tour, to solo projects by indie music groups like Endah N Rhesa and Mocca.

With this kind of enthusiasm, it’s safe to say that Indonesian musicians are really bullish on NFTs, as well as the broader Web3 ecosystem. For Mocca, based on my short chat with the group via WhatsApp, the long-running Bandung-based jazz and swing band genuinely thinks that NFTs can be highly beneficial to the creative industry, particularly the music industry in the near future.

Mocca recently launched a music NFT project called “Mocca Music Card”. The modest collection contains cards with pictures of the band members — Arina (vocals & flute), Toma (Bass), Riko (guitar), Indra (drums) — and song clips playing in the background. There are five editions available, each with a total supply of 50 NFTs. Interestingly, this initial drop features an exclusive acapella version of one of Mocca’s most popular songs, “I Remember”. 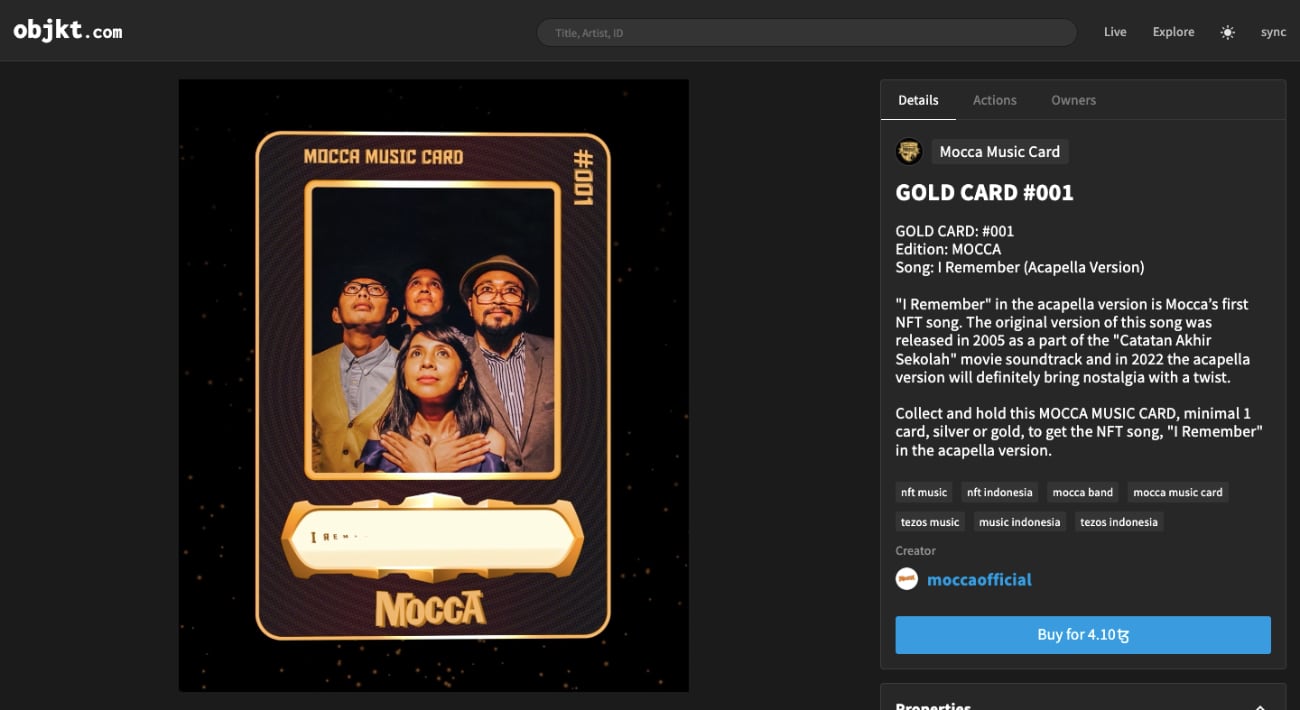 When I asked about what the biggest inspiration for Mocca Music Card is, the group answered basketball cards. At first I thought that the group was referring to NBA Top Shot, which is a popular NFT project featuring ‘cards’ of some of the best moments in the entire history of the NBA. But then they mentioned how collecting basketball cards used to be a popular hobby for some of them, and I realized that they meant the physical trading cards.

As we all know, trading cards are collector’s items, and Mocca essentially wants people to treat these NFT cards in a similar way. Different rarity levels, exclusive songs, and holder-only utilities are incentives for people to become collectors. Obviously, Mocca is targeting its most loyal fans, especially those who want to enjoy songs that previously hadn’t been available anywhere else.

Of course you can just listen to the song by visiting each NFT listing on the marketplace, which is Objkt.com. However, that is only a short preview, as Mocca is only allowing holders to get access to the full song via airdrop. So far, the group hasn’t considered releasing “I Remember (Acapella Version)” to any streaming platforms.

As for the blockchain of choice, Mocca opted to run with Tezos simply because it currently has one of the biggest communities for Indonesian artists. And since Mocca is embarking on this NFT journey with a community-based approach, it decided to also build its community on Tezos.

Around 70 percent of the total supply of the first edition of Mocca Music Cards has been sold, surpassing the group’s initial target of 50 percent. Mocca had already delivered the full song to holders this week, and it will soon start delivering other holders-only benefits, like a free songwriting class for example.

Mocca seems to be genuinely excited about the future of NFTs in the Indonesian music industry. It acknowledges innovation in the space like Netra, a music NFT platform that utilizes royalty-sharing mechanisms. Mocca sees potential for musicians to take advantage of such platform, even though the group hasn’t yet considered to be a part of it.

Mocca is currently directing all its efforts to its Mocca Music Card, with new cards and songs already planned for the next few months. It also has plans to collaborate on projects with other NFT artists.