A16z: Web3 Already Has Real-World Impact, Even If It's Still Early Days

In what will be an annual overview, VC firm a16z depicts the state of the Web3 ecosystem today

Big time venture capital firm Andreessen Horowitz (a16z) is no stranger to the crypto industry. The firm has been investing in the crypto space for almost a decade now, and it has backed some of the biggest names in the Web3 ecosystem, such as OpenSea, Sky Mavis (developer of Axie Infinity), and Yuga Labs (owner of Bored Apes Yacht Club and CryptoPunks).

While we've all witnessed the recent crypto market downturn, a16z believes that behind the volatility and the chaotic nature of crypto, there's still an underlying logic at work. In the firm's view, the crypto market develops in the so-called "price-innovation cycle". Unlike in some industries where prices are often a lagging indicator of performance, in crypto they are the leading indicator.

In the crypto industry, prices are a hook. The numbers drive interest, which drives ideas and activity, which in turn drives innovation. The result is consistent long-term growth, driven by a feedback loop between interest and innovation. a16z sees this cycle as the engine that has propelled the industry ever since Bitcoin's inception in 2009.

a16z shared this takeaway through the 2022 State of Crypto Report, which starts the firm's annual overview of trends in the crypto industry. The report also outlines how crypto has already had a real-world impact, particularly with the rise of decentralized finance, or DeFi. In just less than two years, DeFi has grown from nearly zero to $100 billion, a16z notes in the report. If DeFi were to be appraised based on total assets under management, it would represent the 31st largest bank in the US.

But the impact of crypto goes beyond financial innovation. a16z firmly believes that crypto is also addressing other broken marketplaces. It points out startup like Spruce, which enables people to control their own identities, rather than ceding that power to online intermediaries like Google and Meta; or Sound, a platform that allows musicians to monetize directly from their fans.

Speaking of musicians and other creators, the report also details how Web3 has become a much fairer place for creators than Web2 — which again shows how it's already impacting the real-world. It underlines the much lower take rates that Web3 platforms have than the Web2 giants, with OpenSea only charging a 2.5% commission despite being the largest NFT marketplace today. 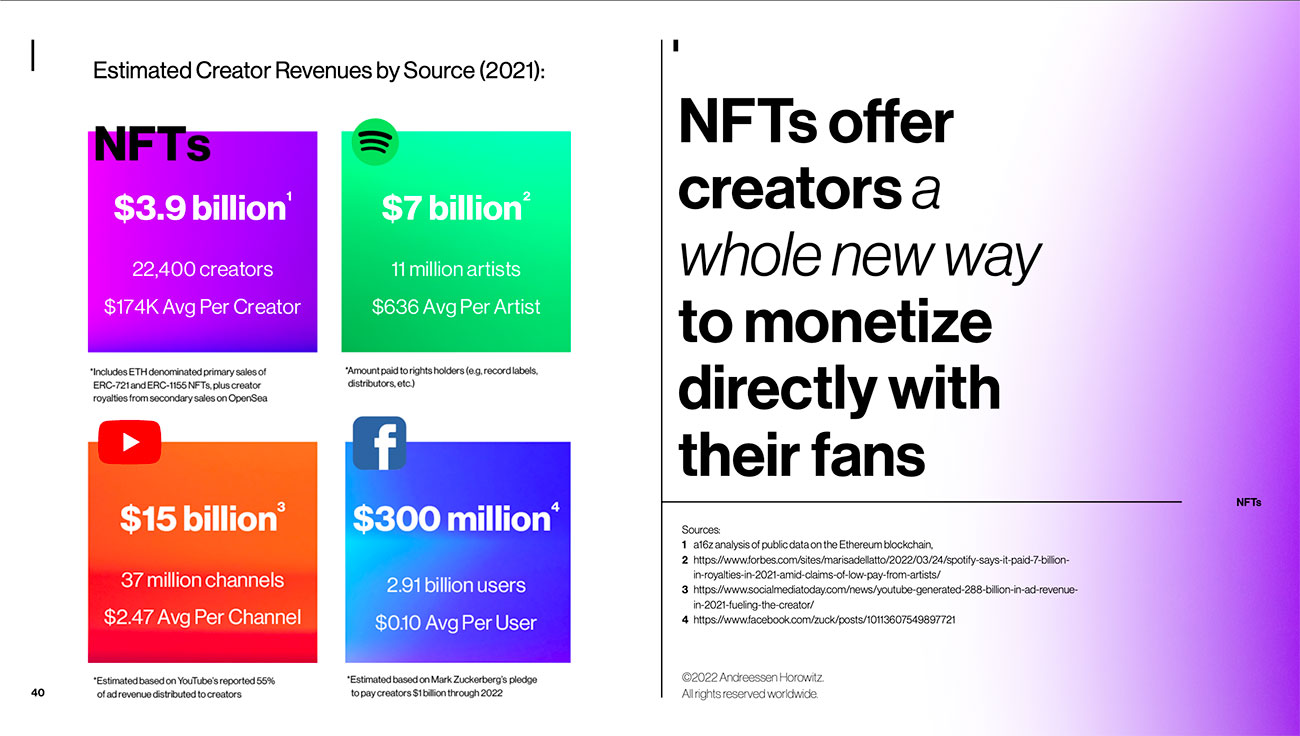 According to data cited by the report, primary sales of Ethereum-based NFTs in 2021, plus the royalties paid to creators from secondary sales on OpenSea, yielded a total of $3.9 billion. This is already almost four times as big as the $1 billion creator fund that Meta has prepared for 2022, and OpenSea has way less creators than Facebook and Instagram combined. Based on a16z's analysis, Web3 paid out $174,000 per creator last year, which is a staggering number when you consider that the average earning of artists in Spotify is only around $636.

Another big part of Web3 is gaming. The report shows that 20% of NFT sales volume in 2021 was gaming-related assets, and that 49% of crypto wallet activity comes from games. Interest in the metaverse has also exploded, with virtual land sales totaling nearly $2 billion. Despite all that, a16z thinks that we are just beginning to see the true potential of Web3 gaming.

a16z's report also dives deep into the multi-chain nature of Web3. While Ethereum is still the dominant player, other blockchains like Solana, Polygon, and BNB Chain are angling for similar success. This is in part because of Ethereum prioritizing decentralization over scaling, which allows other blockchains to swoop in and attract users with promises of better performance and lower fees. However, at the end of the day, there won't be one single winner in the blockchain space.

As of today, a16z estimates that there are somewhere between 7 million and 50 million active Ethereum users. The firm concludes that this is still early days for Web3, and it's bullish on Web3 reaching 1 billion users by 2031, provided that the trendlines continue as depicted in the report.